Cyprus on track to exit its adjustment programme sooner than 2016, Draghi says 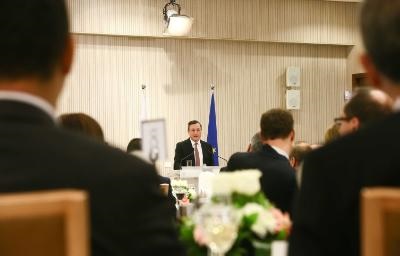 Cyprus is on track to exit its economic adjustment programme sooner than 2016, European Central Bank (ECB) President Mario Draghi has said, adding however that there is no room for complacency.

Speaking at a formal dinner hosted by President Nicos Anastasiades to the member of the ECB Governing Council, Draghi praised Cyprus` efforts to consolidate public finances and its banking sector that came to the brink of collapse in 2013, prompting the government to conclude with the Troika (EC, ECB and IMF) a €10 billion bailout.

Draghi, speaking through an interpreter, acknowledged that various euro area countries, such as Cyprus, are going through difficult adjustment programme, noting that “we are in this together and significant solidarity has been shown.”

Noting that Cyprus had to play its own part and that the Cypriot people have made many sacrifices, Draghi said it is encouraging to see that there are signs of stabilization and recovery ahead.

He also pointed out that the programme has yielded very good results, adding that the outcome is even better that our forecasts two years ago.

Draghi referred to the restructuring and recapitalization of the banking sector has led to a significant improvement in the robustness of the financial sector, with payments normalised and the relaxing of the capital controls imposed in 2013.

It is indeed surprising that Cyprus in on track to exit its adjustment programme sooner than the 2016 deadline, he remarked.

“All these achievements are impressive and command respect from Europe,” he said.

He stressed that there is no room for complacency, as the Cypriot economy and the financial sector especially are facing great challenges.

More steps are needed to restore the smooth functioning of the system and to accelerate the reduction of non performing loans, he added.

Furthermore, the ECB President referred to signs of improvement in the rest of the euro area with the latest figures showing modest growth but he added that unemployment remains at high levels.

He also referred to the ECB quantitative easing programme to tackle the downward trend in inflation dynamics.

But he noted that monetary policy alone is not enough to bring confidence in the euro area in more stable way.

Referring to developments in Greece, Draghi said this enabled doubt in the euro area.

High unemployment in some member states creates fertile ground for the rise of populist movements that offer easy solutions outside the euro area and the EU, he said.

In this difficult context, it is more important than ever for the member-states and the institutions of the EU to reaffirm their strong commitment and will to strengthen the euro area, he noted.

But to categorically remove doubts on the future of the euro area, we need to make more, we need to show that the euro will bring growth, employment and protect its people from economic shocks, he went on to say.

In the short term, that means “we need to work for reforms, investment and prudent financial policy but to achieve these targets in the medium and long term we need to share sovereignty on an economic and financial level,” he said.
CNA/GS/MM/2015
ENDS, CYPRUS NEWS AGENCY