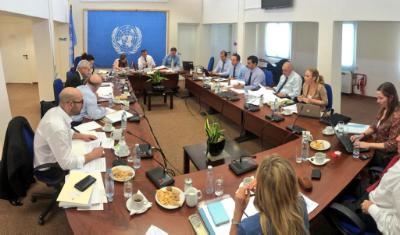 UNFICYP spokesperson Aleem Siddique told the Cyprus News Agency (CNA) that Eide who arrived on Sunday to the island, will stay in Cyprus during the week, and will hold separate meetings with the two leaders, namely Cyprus President Nicos Anastasiades and Turkish Cypriot leader Mustafa Akinci, while he will also “be chairing the negotiators` meetings.”

Siddique noted that “at the moment there will be at least two negotiators` meetings this week, maybe more. At today`s meeting they will plan the week ahead,” he added.

Furthermore, he noted that at the end of the week, Eide will be leaving the island for a few days and then return. The next leaders` meeting, in the framework of the UN-led negotiations on the Cyprus problem, is scheduled to take place on October 30.

Anstasiades and Akinci have been engaged in the negotiations, aiming to reunite the island under a federal roof, since May this year. Cyprus has been divided since 1974, when Turkish troops invaded and occupied 37% of its territory.