Cyprus moves from exploration to exploitation of its natural resources, Minister says 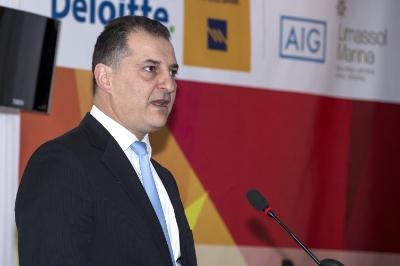 Cyprus is moving for the first time from the exploration to the exploitation phase of its natural resources, Minister of Energy, Commerce, Industry and Tourism Υiorgos Lakkotrypis has said, noting at the same time that this development can transform the country into a regional energy-producing player.

In his address at the Cyprus-Russia Business & Investment Forum, the Minister said that “today’s forum takes place at a turning point concerning both the new era that the Cyprus economy is entering, as well as the deepening of the cooperation between the governments of the two countries.

He expressed President Nicos Anastasiades’ gratitude to President Putin and Prime Minister Medvedev, as well as to the President of the State Duma, Narushkin, for their tangible demonstration of support towards Cyprus through their approval of the restructuring of the loan granted to Nicosia.

The Minister said that the Cypriot economy is now on the road towards full recovery, adding that Cyprus has been able to return to the international markets far earlier than anyone had predicted.

He noted that leading spreads reported huge decrease, as the yield on the government 10-year bond reached yesterday 4-year record low at 3.95%, having peaked two years ago at 16.4%.

He said that tourism, shipping and professional services have proved to be the economy’s most resilient sectors, outperforming predictions. The number of registration of new companies has been steadily increasing pointing towards the road of recovery.

Having maintained a stable and investment friendly tax regime, he added, the government is determined to develop a comprehensive growth reform strategy, limiting bureaucracy, simplifying procedures and creating a friendlier business and investment environment.

Our main objective, he continued, is to boost the country’s international competitiveness and established reputation as a centre of excellence for international investment and business activities and to make Cyprus one of the best places globally to start and grow a business.

The Minister noted that today’s Cyprus-Russia Business and Investment Forum takes place at a critical moment for the Cyprus hydrocarbons sector, as the country is preparing to declare Aphrodite gas field commercial and receive the Field Development Plan.

“I cannot emphasize strongly enough the significance of this development, as it would be the very first time that Cyprus is moving from the exploration to the exploitation phase of its natural resources. This development can in fact transform the country into a regional energy-producing player, offering new growth opportunities for the entire economy”, he underlined.

Beyond the gains arising from the exploration and exploitation of its indigenous hydrocarbon resources, as he said, Cyprus also has a unique opportunity to benefit from the regional oil and gas developments.

In this context, he concluded, “Cyprus could prove a valuable partner to the Russian energy industry players, with regards to utilizing the existing and upcoming opportunities in upstream development and gas infrastructures”.

Russian Ambassador to Cyprus Stanislav Osadchiny in his address said that “as everybody knows the negotiations between Russian and Cypriot leaders were very successful and confirm the willingness of both countries to further develop their excellent friendly relations”.

“One of the fields of our partnerships is substantial and growth cooperation in the economic field. The results of the Moscow Summit was another proof of this partnership. We signed several mutual agreements aiming to increase mutual trade and investments as well as strengthen bilateral business ties”, he added.

The Russian and Cypriot side agreed on promoting participation of companies from both countries in various joint projects, including transport, tourism, agriculture, banking, energy and other fields, he said.

“I am sure that this forum will give good opportunities to the representatives of our two countries to exchange views on the prospects of cooperation which were discussed actually in Moscow in brief. Here we can go into details and try to find ways to enhance our cooperation”, he concluded.

In his address, Nikolay Podguzov, Chairman of the Russian Part of the Russia – Cyprus Intergovernmental Commission for Economic Cooperation, Deputy Minister of Economic Development of the Russian Federation made a special reference to the successful visit of President Anastasiades to Moscow and the agreements signed between the two countries in various fields.

He said that “this forum will create new opportunities for our businesses and we will see new projects for mutual cooperation” and referred to the friendship and cooperation that exist between the two countries.

He thanked the Cyprus government for its position on EU sanctions against Russia, according to which “sanctions are not an instrument which leads to fruitful cooperation”.

President of the Limassol Chamber Costas Galatariotis, in his address on behalf of the President of the Cyprus Chamber of Commerce and Industry, placed great emphasis on the important agreement recently signed between Cyprus and Russia during President Anastasiades’ visit to Russia “deepening even further the cooperation of the two countries in various areas”.

He noted that today’s forum is of a great significance since there is great potential for strengthening and expanding business relations between the two countries.

“We aim at enhancing these fields in Cyprus in which Russia has shown significant accomplishments”, he said.

In conclusion, he welcomed the state’s will and determination to expand its financial and business relations with Russia, noting that the Cyprus economy has begun to show signs of recovery.
Vice President of the Chamber of Commerce of the Russian Federation Georgy Petrov said that “it’s very good for us to hear this good news that the Cyprus economy is on the way to recovery”.

He said that there are very strong economic ties between Cyprus and Russia, adding that Russia understands Cyprus` stance with regard to EU sanctions against the country

“Our traditional ties with our foreign friends and colleagues will continue”, he said.

Chairman of the Russian Business Council on Cooperation with Cyprus Mikhail Kuzovlev welcomed the fact that the economy of Cyprus is on the road towards full recovery, adding that today’s meeting takes place at a turning point of relations between the two countries.

He noted that the Cypriot economy performed better than expected.

He also said that the impressive recovery demonstrated by the Cypriot economy paves the way for further development of the traditional strong economic and business ties between the two countries.

As he said, the main assets to be privatised are Cyta with a target date the end of 2015, EAC which is the state monopoly with a target date the end of 2017, a number of real estate assets, the Port of Limassol and the Casino Licence, the National Lottery, Cyprus Stock Exchange, Cyprus State`s Fair Authority and the Cyprus Petroleum Storage Company.
CNA/EMA/GMI/MM/2015
ENDS, CYPRUS NEWS AGENCY