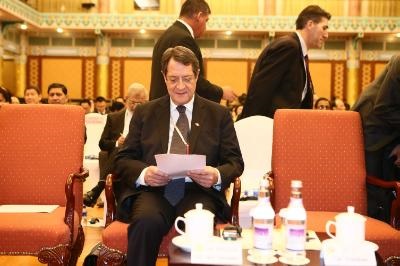 The Cyprus issue and economic relations between Cyprus and China will be on the agenda of a meeting President Nicos Anastasiades will have later today with the President of the People’s Republic of China Xi Jinping in Beijing.

According to an official announcement, the bilateral meeting between the two Presidents will take place after a multilateral meeting of the President of China and the heads of states who participated in the Conference of the Asian Political Parties on the initiative for the Silk Road, organized by the Chinese government.

During the meeting between President Anastasiades and President Jinping issues related to the Cyprus problem, bilateral relations with emphasis on the promotion of economic relations, the China – EU relations and regional matters will be discussed.

President Anastasiades will also address an event at the Renmin University in Beijing.