Cyprus has become an example to follow, says EU Finance Commissioner in an interview with CNA 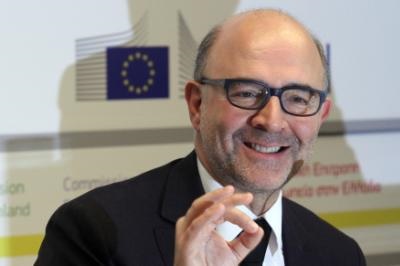 Cyprus from an example to avoid has become an example to follow, Pierre Moscovici, EU Commissioner for Economic and Financial Affairs, Taxation and Customs Union said in an interview with CNA, adding the the Cypriot economy has made remarkable progress following two years of an adjustment programme implementation.

Moscovici advised against en early exit from the adjustment programme which in his words constitutes a protection for Cyprus, pointing out that there’s still work to be done in terms of programme commitments, such as privatisations and public service reforms. He also noted that an Asset Management Company, the so-called bad bank, would not solve the pressing problem of non-performing loans, which have to be restructured even if an AMC was in place.

The small island-state came at the brink of collapse in early 2013 prompting the then newly-elected government to conclude on a €10 billion financial assistance programme that included a controversial conversion of banking deposits over €100,000 to equity to recapatalise Cyprus` largest bank, whereas the island`s second largest lender has been wound down. The banking system was decimated forcing the authorities to impose capital controls to avert a bankrun. However two years on, the country is slowly emerging from the crisis, the economy overperformed its initial bleak projections and has recorded economic growth after a 14-quarter recession.

“I would say that Cyprus has made remarkable progress since the programme was launched. I was there in 2013 when we had some dramatic decisions to take. I think that Cyprus has become an example to follow rather than an example to avoid and of course this is quite an achievement given the situation in 2013,” Moscovici said.

He recalled that the island`s financial system which back in 2013 was “on the brink of ruins” has been stabilised and recapitilised, capital controls have been lifted, public finances are back on track, enabling Cyprus to tap the international bond markets, and public debt, which currently is at 107 per cent of GDP is set to be lower next year.

“So, yes my first observation is remarkable achievement,” the French Commissioner said, stressing however that “Cyprus now needs to ensure it stays in the course of reform for the remainder of the programme and beyond.”

He cited public administration reform, privatisations and reducing non-performing loans stock which is among the highest in the EU as the key steps to be taken.

“Tackling the NPLs rate is vital to enable banks to start lending the economy and we need to have rules for borrowers and banks to sit down together and work debt restructuring agreements,” he said.

“I would prefer to invest in these results and make further progress because afterall key reforms are still under way,” he said adding, “in a way, this programme for the moment is a protection for Cyprus.”

Responding to a question, Moscovici said that Cyprus will not use all €10 billion from its financial assistance package, due to “impressive fiscal performance” and because banks covered their projected capital shortfalls without resorting to the €2.5 billion earmarked for bank recapialisation, except from the Cooperative Central Bank that has been nationalised as the government injected €1.5 billion from bailout funds to cover its capital shortfall.

“We now estimate that Cyprus` financing needs are lower than expected at the onset of the programme,” Moscovici said.

A bad bank would not lower NPLs

On the need to set up an asset management company, as a means to address the financial system`s problem of high Npls, Moscovici said an AMC, whether funded by public or private funds, “does not lower the level of non-performing loans in a financial system, rather, it simply transfers these loans to another financial institution still within the system,” pointing out that even with an AMC in place, these assets will still be worked out and restructured if the bank`s books would be cleared.

“This is why policy initiatives such the foreclosure and insolvency framework are essential, they would still be necessary even in the presence of an AMC and this is why reducing NPLs has been a key priority of the adjustment programme,” he said, pointing out that the authorities should also address other impediments such as securing a functioning legal framework for the sale of loans.

Deposit haircut should be avoided

Two years after the bank deposit haircut, a tool tested for the first time “as a response to the exceptional situation that was specific to Cyprus,” Moscovici said that the Euro area has come a long way in establishing a banking union providing the member-states with common supervision and a fully-fledged resolution framework to deal effectively with unsound or failing financial institutions.

“I think that these rules that were made for exceptional circumstances shouldn’t be used elsewhere because we need to avoid those circumstances and the new rules make clear that deposits under €100,000 are protected under all circumstances,” he said.

As to whether the programme`s buffer could be used for funding the solution of the Cyprus problem, Moscovici said the European Commission is closely following the talks between President Anastasiades and the leader of the Turkish Cypriot community “and we find that it is encouraging that the talks resume.”

Expressing hope for “a sustainable solution to the long-lasting division of the island will be found,” Moscovici added that the Commission “stand ready to support the two communities in their efforts in this direction.”

But he said that the solution should be separated from the economic adjustment programme.

“The programme was designed to support the country`s efforts to adjust and rebalance the economy and the financial envelope attached to the programme is therefore used to support this economic adjustment and recovery and not for other purposes. We will see what kind of needs will emerge from positive talks but solution must first be political and then we will see,” he said.

A three-pillar approach for growth in Europe

On the prospects of the euro area and Europe, Moscovici noted that growth is picking up, as the Commission and the ECB have been working to correct root problems that pushed the continent in stagnation since 2008. Growth is picking up, while deflation with the help of the ECB`s massive Quantitative Easing programme returned to positive territory, he added.

But Moscovici noted that his job is to make sure that recovery is not due to cyclical but structural reasons.

“When things are getting better is not the time to loosen up efforts, on the contrary it`s time to make more structural reforms because by definition a cycle has its ups and downs,” he said, adding that the Commission has a three-pillar approach, namely consolidation with some flexibility and intelligence, investments and structural reforms.

“There is a change in this Commission, this Commission is a Commission of recovery and we have one priority growth and jobs. But we believe than being serious also contributes to growth and jobs, we are not advising or leading any kind of austerity polices not at all, our are policies are growth friendly but reducing debt is growth-friendly,” he said.

No plan B for Greece

On Greece, Moscovici said there is no plan B other than a stronger reformed Greek economy within the euro area.

“Greece is a member of the euro area and I cannot think of this fact differently and we are working day and night towards a single solution to help the country overcome some significant challenges and difficulties and my hope is that we can in the days to come find an agreement,” he said.

“I now that Greece and Cyprus remain close partners especially in trade but I believe that we should and we will, we are working on the idea, to avoid any kind of Grexit, we have no plan B, other than Greece with a reformed and stronger economy in the euro zone,” he concluded.