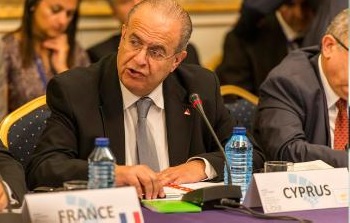 In his speech, Kasoulides welcomed the fact that Russia initiated such a meeting, pointing out that the UN remains the top international body for order and legality, but must, at the same time, adapt to the many challenges related to security, and that the UNSC resolutions must be implemented.

According to Kasoulides, no crisis can be resolved by a single force or by just one of the parties involved and noted that many crises require an efficient and mutually-reinforcing multilateral diplomacy.

He underlined that the EU must play its role in conflict resolution in our neighborhood, stressing the importance of the policy of prevention in response to terrorist threats .

Referring to the conflict in Libya, Kasoulides said that the formation of a government of national unity has been long overdue and stressed that the international community must provide support. On Syria he said that it is obvious that the response of the international community has not relieved the difficulties the Syrian people are faced with and has not facilitated a political settlement.

Kasoulides continues his contacts in NY and so far has met with his counterparts from various countries and other officials and has participated in numerous meetings taking place on the sidelines of the UN General Assembly 70th session.