Cyprus, Egypt and Greece conclude tripartite meeting with the Declaration of Nicosia (1) 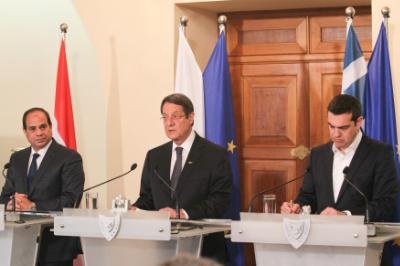 With the adoption of the Declaration of Nicosia the three leaders of Cyprus, Egypt and Greece agreed on Wednesday on further broadening and deepening the relations among their countries in a series of sectors, including the economy, trade, tourism and energy.

The three leaders examined, on the basis of the Declaration of Cairo which was adopted six months ago at a similar meeting in Egypt, the deepening of their cooperation in existing areas of action and the expansion of the cooperation to other fields, Anastasiades said at a joint press conference with the Egyptian President and the Greek Prime Minister.

President Anastasiades stressed that the Declaration of Nicosia is a “point of reference” for the priorities of the three countries.

He noted that the tripartite dialogue and cooperation promotes peace, stability, security and cooperation in the Eastern Mediterranean, a cooperation, he said, that includes the fields of politics, economy, trade, tourism and energy.

Anastasiades said that the three leaders reaffirmed their common belief that the discovery of significant hydrocarbon reserves can be a catalyst for regional cooperation and contribute to regional stability.

The Cyprus issue was part of the agenda, the President said, adding that he briefed the two leaders on the latest developments in the Cyprus issue and expressed his will and determination to work in cooperation with the new leader of the Turkish Cypriot community, hoping for Turkey to support the process to achieve a just, viable and functional solution of the Cyprus problem as soon as possible.

Egypt`s President Abdel Fattah al-Sisi, speaking through an interpreter, noted that his country is interested in the unity of the people of Cyprus, with all its communities, the sovereignty, independence and integrity of the country.

He said that they discussed new fields of cooperation including the economy, energy, trade, tourism and maritime transport.

“We have agreed to upgrade the level of cooperation in order for our countries to become a natural gateway to the strengthening of cooperation between Africa and Europe,” he said, emphasizing his sincere intention to promote relations among the three countries.

Alexis Tsipras, the Greek Prime Minister that this trilateral cooperation is of great strategic importance as Greece, Cyprus and Egypt are pillars of stability and security in a destabilized region.

He stressed his position for a just solution of the Cyprus problem based on the principles of the UN and underlined that Greece supports the efforts for the talks to resume, adding that he hoped that they will lead to substantial progress. Tsipras said that Mustafa Akinci`s election to the leadership of the Turkish Cypriot community is an interesting development.

The Greek Prime Minister welcomed the results of the tripartite meeting and invited the leaders of Cyprus and Egypt to Athens for their third meeting.