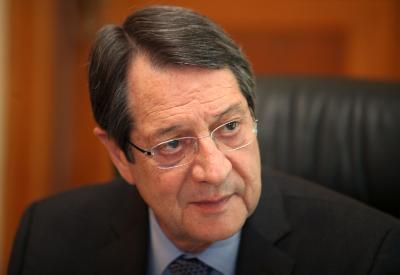 Cyprus` economy will restart in 2015, the President of the Republic Nicos Anastasiades tells the Cyprus News Agency, adding that the credibility of the state and the trust in the island`s banking system have been restored, something which is reflected in the positive reviews by Cyprus` international lenders – the European Commission, the European Central Bank and the IMF – and in the country’s upgraded ranking by international rating agencies, indicating that all expectations are that the economy will pick up this year.

In an interview with CNA, President Anastasiades admits that high expectations had been nurtured among the people with regard to the discovery and exploitation of hydrocarbons in Cyprus` exclusive economic zone both (EEZ) in relation to financial benefits and a solution to the longstanding Cyprus problem. The results so far as to the discovery of natural gas reserves may not meet these high expectations, nonetheless this does not mean that there are no natural resources in Cyprus` EEZ, he points out. Natural resources are an incentive to solve the Cyprus problem, he insists, warning though against allowing this incentive to become counterproductive as far as a political settlement leading to the reunification of the country is concerned.

Replying to questions on other issues related to the economy, the President expresses the government’s support in a policy which will encourage the creation of conditions for growth, job creation and effective tackling of the crisis not only by applying austerity and consolidation measures but also by promoting measures to help development. He notes that this is something that concerns the European Union.

Commenting on the pending issue of the foreclosures, which is a crucial requirement for the island`s €10 billion bailout, since it is a precondition for the sixth tranche of €436 million, he assured that the primary residence and business premises are secured, allaying fears that foreclosures might lead to the creation of homeless people, a phenomenon Cyprus has not yet experienced.

Replying to questions, the President acknowledges that not everything is faring well for the Cypriot economy and refers to EU sanctions on Russia, saying that these have affected Cyprus` productive sectors such as agriculture and tourism.

Asked how far the expected reboot of the economy has been realized, given that he had pledged to restart the economy mainly through foreign investments, in the aftermath the Eurogroup agreement in March 2013 on a €10 billion bailout, which featured an unprecedented haircut on deposits and the closing of Cyprus` second largest bank, the President recalled that when he came to power on March 1st 2013 the state was on the verge of default. “To attract investment you need first to restore trust and credibility both in the state as well as in the banking system,” he said.

“In the two years that followed I can proudly say that the state`s credibility has been restored, as the positive reviews of our international lenders suggest, the encouraging revisions published by international rating agencies indicate and as the successful borrowing directly from the markets a year and a half after the Eurogroup agreement demonstrates,” he stressed.

The successful recapitalization of the banks and their success in the stress tests carried out by the European Central Bank have also led to the restoration of trust in Cyprus` banking system, he went on to say. “Therefore, the expected restart of the economy will follow right after these important factors which can encourage investors – either foreigners or Cypriots – to proceed with investments, with creating new jobs and of course with development,” he added. “I strongly believe that we are now at a stage that the economy`s restart should materialise in the current year,” President Anastasiades said.

Cyprus takes a hit following EU sanctions imposed on Russia
–———————————————————————-
Asked about the impact on Cyprus and how Nicosia is handling the issue of the sanctions decided and implement by the EU against Russia as a result of the crisis in Ukraine, President Anastasiades admits that agriculture, tourism and to a lesser extent the services sector have taken a hit, which he describes as a negative development to be taken into account for the current year.

“Our effort focuses on minimising the negative fallout from the sanctions and my forthcoming visit to Russia could be seen in this context. We shall be discussing ways to handle the situation,”, he said.

He also pointed out that the sanctions affect not only Cyprus but also the whole of the EU, noting that prior to the imposition of sanctions the value of annual transactions between Russia and the EU amounted to 300 billion euros.

“I would like to believe that the recently agreed truce in Ukraine will contribute to the understanding that the only means to solve the Russian – Ukraine crisis is through diplomacy,” he said.

“Without wishing to foster the same high expectations that others had cultivated, I am saying that there is the possibility of discovering sufficient deposits to create expectations for prosperity and see this serve as an incentive for a political settlement,” that will reunited the country, divided since the 1974 Turkish invasion, he said. Elaborating further on the Cyprus problem, President Anastasiades warns against allowing hydrocarbons to become a counter-incentive for a solution and referred to recent moves by Turkey, which under the pretext of defending the rights of the Turkish Cypriots, issued a NAVTEX and sent the vessel Barbaross out at sea for explorations.

“Turkey`s actions reverse what I have just described as an incentive for a solution of the Cyprus problem. If the Turkish Cypriots are going to have the right to decide jointly on the management of natural gas resources prior to an agreement on the Cyprus issue, they will also have the right to exert pressure during the negotiations in order to consent to managing natural resources in a way that will satisfy their claims,” he explained.

“In my opinion what matters most and would be an answer to all those who are interested in achieving soon a solution but do not take into consideration the problems created by this stance, by the developments we have had to deal with after October 3, is to help in order for the talks on the Cyprus problem to begin again the soonest possible and the soonest reach an agreed solution that would leave no losers and no winners”. A solution, he went on to say, that would be to the benefit of the people of Cyprus as a whole, both Greek Cypriots and Turkish Cypriots, and would create the conditions for a truly European state, which will protect the rights of its citizens based on what has already been agreed, namely a bizonal, bicommunal federation with political equality as this is defined by the UN.

The President was also invited to comment on developments with regard to the adjustment programme agreed with the Republic`s international lenders and in relation to the preparations for the fifth draft bill which will complete the insolvency framework.
Cyprus is at present in breach of its programme as the Parliament has suspended the implementation of a law on foreclosures, which is a crucial prerequisite of the fifth review that took place in July 2014. The IMF postponed the disbursement of a €86 million as part of the programme`s sixth tranche amounting to €436 million. The House of Representatives voted for the suspension of the law on foreclosures of mortgaged immovable properties until the 2nd of March 2015.

Eurogroup President Jeroen Dijsselbloem has warned only if the foreclosures hurdle can be overcome the Cypriot adjustment programme can be brought back on track.

On the other hand, political parties express fears that proceeding with the foreclosures without simultaneously implementing the insolvency framework would lead to homeless people, a phenomenon Cyprus has not yet experienced.

President Anastasiades stressed that massive foreclosures have not been experienced in other countries applying a similar programme. Furthermore, he pointed out that it would be a catastrophy for the banks if they were to proceed with massive foreclosures in a period of crisis. Additionally, he said, the vulnerable groups are sufficiently protected. The fifth draft bill on insolvency, on which negotiations with the institutions (ECB, Commission, IMF) are underway, will provide sufficient protection not only for the primary residence but also for businesses, small and medium enterprises under certain predetermined terms and criteria, he added.

At the same time, President Anastasiades criticized the postponements of the law on foreclosures voted by the House of Representatives as acts that make Cyprus appear inconsistent with the implementation of the terms of its programme.

Demonstrations against austerity
–————————–
Asked whether he thinks protest rallies similar to the ones that have taken place in Greece and in other European countries could take place in Cyprus and if a policy shift on the matter has been discussed at the EU highest level, President Anastasiades said that Europe is concerned with the strict austerity measures in place and to be more exact it is concerned with the programme announced and being implemented by the Commission`s President Jan Claude Junker, which provides for 300 billion euros for development and investment.

Public protests in Cyprus are limited, he observed, saying however that this does not mean that it reflects the actual situation. Cypriots may not participate in public events condemning such policies but that does not mean they do not disagree with such policies, he acknowledged. Therefore, he concluded, “we support that policy which will help create the preconditions for development, for creating new jobs and for handling the crisis not only through austerity and consolidation measures but also through measures that would fuel growth.”