Cyprus celebrates Independence Day with a military parade in Nicosia 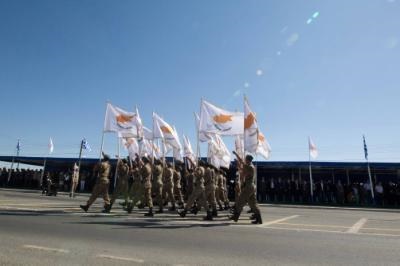 The Republic of Cyprus celebrates on Thursday the 55th anniversary since the declaration of its Independence, with a military parade that will take place in Nicosia.

The President of Cyprus Nicos Anastasiades will receive the salute of the parade, in the presence of the country`s political, religious and military leaders.

The Greek government will be represented by Minister of National Defence Panos Kammenos, who arrived on Wednesday in Cyprus. Kammenos will be received by President Anastasiades, after the parade.

In the morning, a religious service will be held at the Imprisoned Graves, where he will lay a wreath in honor of the 13 fighters of the 1955-1959 liberation struggle (EOKA) against the British rule, who are buried there.

Later on he will go to the Presidential Palace, to lay a wreath to the statue of Archbishop Makarios III, the first President of the Republic of Cyprus.

At noon, the President will host a banquet for the diplomatic corps.