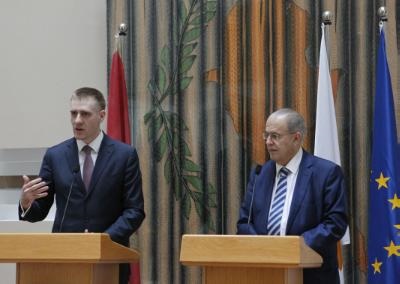 Cyprus and Montenegro have signed an Agreement on Cooperation in Fighting Terrorism and Organized Crime.

According to an official press release, bilateral relations and ways for their further enhancement, the Cyprus problem, energy issues, regional issues of mutual interest with emphasis on the ways for combating terrorism, the developments in the region of Eastern Mediterranean and the Middle East, the crisis in Ukraine, as well as the regional cooperation in Western Balkans, were at the center of the discussion. Moreover, the two Ministers discussed extensively Montenegro’s accession negotiations and the reforms implemented by the Government of the country, in the framework of harmonizing with the European standards.

In statements to the Press, following the signing of the Agreement, Minister Kasoulides said they “had a very fruitful discussion” in continuation of the productive first trilateral meeting they held on Tuesday together with the Maltese Foreign Minister.

Kasoulides said the Agreement is evidence of multifaceted bilateral collaboration and determination to assist in effectively addressing asymmetrical threats.

The Cypriot FM said the negotiations set the practical foundations to a new cooperation between Cyprus and Montenegro, which includes providing technical assistance to Montenegro, so that it is facilitated in the completion of its accession process.

The Memorandum of Understanding on European Integration between Cyprus and Montenegro, he added, provides an important medium towards this direction as well and this has already been tested in the past, and particularly during the Cyprus Presidency of the Council of the EU.

“The exemplary progress achieved by Montenegro and we were encouraged with the dedication of Montenegro in continuing with necessary reforms. The harmonization path indeed is a painstaking process that entails a show of unwavering commitment, but it certainly pays off through the transformation value of institutional structures of the acceding country and its society as a whole”, the Minister added.

Cyprus, he noted, “is ready to offer technical expertise in the very important path for Montenegro in specific areas of particular interest, such as rule of law, justice, customs union, commercial law”.

On his part, the Minister of Foreign Affairs of Montenegro said today`s meeting was a continuation of the excellent political communication, cooperation and relationship between the two countries.
Today`s agreement, “shows our commitment to cooperate beyond our political meetings, but to cooperate in different fields of action, which are important for both countries. For us, in Montenegro, it is incredibly important because of the possibility to transfer experience, knowledge, know-how from Cyprus to Montenegro”.

Luksic said it is “important for us that we are progressing in a way forward towards the membership in the European Union and the Agreement that we signed today will let us meet the different standards, noting that “battling this sort of negative phenomena is something that no country can deal with on its own. There has to be cooperation.”

The Montenegrin Minister said he is thankful for the possibility to have Cypriot experts helping the country in different fields of negotiations process with the European Union. Ways to organize public institutions and public administration is something that experience could be transferred from Cyprus, he said.

The two, he added, touched the point of cooperation in different bilateral and regional fora, exchanged views about the current state of affairs in the region and agreed that cooperation in multilateral institutions is to the benefit of both countries.

Asked about the importance of the Agreement signed today for Montenegro, Minister Kasoulides replied that the fact “we have decided to face in collaboration, and in collaboration with many other countries, the asymmetrical threats demonstrates that we are willing to face this threat that is a threat for the European Union and for many countries in the area”.