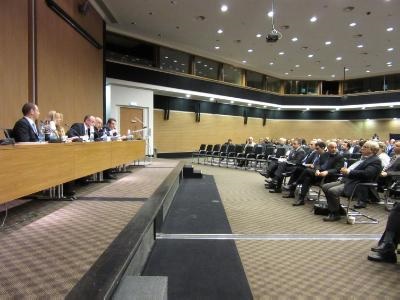 Avgoustinos Papathomas and David Dunckley have been appointed as liquidators for the purpose of winding up the affairs and distributing the assets of the Cyprus Airways.

The appointment of the two liquidators was held here today during the two consecutive meetings of shareholders and creditors of the company.

The two were nominated by the Government of the Republic of Cyprus as the largest shareholder of the Cyprus Airways with approximately 93% of the share capital and the largest creditor with 56%.

The members of a Committee of inspection were also appointed during today`s meetings.

The Committee is comprised of five members, three officials from the Ministry of Finance and particularly from the office of the Accountant-general and two representatives from the empoyees’ trade unions.

This committee will inspect the work of the two liquidators under the supervision of the Registrar of Companies and Official Receiver Spyros Kokkinos who was present at today`s meetings.

The meetings were held under the strong protests and discord of shareholders, creditors and the company`s employees, who described the procedure as “illegal” and irregular”, noting that any decision taken” will be void”.

State-owned CA entered a voluntary liquidation on Friday January 9, after the EU Commission Directorate General ruled that the air carrier should return €103 million of state aid it had received since 2012, breaching EU rules on state aid.