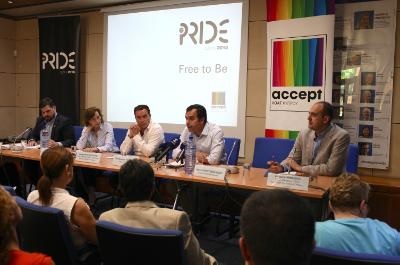 The 2nd Cyprus Pride Festival under the slogan “Free to Be!” will begin on May 28 and will culminate in the Cyprus Pride Parade in Nicosia, on June 6, a non governmental organisation fighting for the rights of lesbian, gay, bisexual, trans-sexual and inter-sexual (LGBTI) people in Cyprus, said on Monday.

Cyprus ranks 39th out of 49 European countries with regard to national legislation and human rights policy for LGBT people, based on the Rainbow index of ILGA-Europe, the international organization for LGBT rights in Brussels, the organisers said at a press conference.

Accept-LGBT Cyprus President Costas Gavrielides said that last year`s festival and pride parade proved to be a landmark in human rights advocacy for Cyprus and led to a constructive social dialogue. More than 4,500 people turned out for Cyprus` first gay pride parade in the previous year, among them former President of the Republic George Vassiliou, representatives of all parliamentary parties, the European Parliament and the European Commission, 15 foreign embassies, the plenary of the Council of ILGA- Europe, as well as the Youth Board of Cyprus, he noted.

Gavrielides urged lawmakers to pass as soon as possible a law on cohabitation, saying it would be an essential step towards the elimination of significant discrimination against the families of same-sex couples.

President of Accept – LGBT said they propose the criminalisation of public homophobic and transphobic violence and hate speech and the legal recognition of the sex that the individuals choose to be.

He added that a poll of the Pulse Market Research company revealed that 64% of those polled, ie 2/3 of the citizens, think that the Gay Pride Parade should continue taking place.

Deputy Head of the European Parliament office in Cyprus, Alexandra Attalidou, whose speech was read out by the Public Relations Officer, Vangelis Vassiliou, stressed the importance of a resolution adopted last February by the European Parliament strongly condemning any form of discrimination based on sexual orientation and gender identity, pressing also for a legal framework to combat discrimination in the EU.

The two pending bills on cohabitation and the criminalisation of homophobic rhetoric suggest that Cyprus is slowly progressing towards strengthening equality and combating discrimination, said the Ombudsman Eliza Savvidou.

The Cyprus Pride Festival is supported by the Municipality of Nicosia for the second consecutive year, under the auspices of Constantinos Yiorkatzis, the Mayor, who said that the political leadership must actively demonstrate that all the citizens are considered equal and must oppose racism.

The press conference was addressed also by members of the parliament who supported the festival and the march.

Earlier in May the Cabinet approved a draft bill governing cohabitation agreements between heterosexual and same-sex couples.