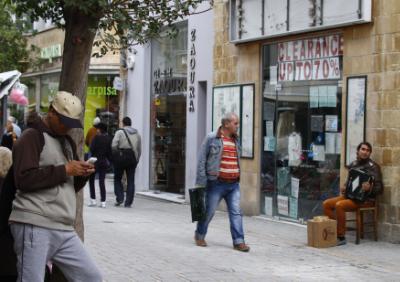 A Eurobarometer survey has found that in their majority Cypriots are pessimistic about the situation in Cyprus and the EU in general.

The survey`s findings for the autumn of 2014 which were presented on Wednesday, in the House of Europe, in Nicosia, show that Cypriots have become mistrusting of policies followed and quite a few are more disappointed compared to other years by both Cypriot and European institutions.

At the same time participants in the survey do not foresee great improvement in neither a personal, national nor European level.

Despite the fact that 80% of Cypriots are satisfied by their lives, 93% feel that the country`s economic situation is bad. It is the fourth highest percentage EU wide after Greece (98%), Spain (97%) and Portugal (94%) and much higher than the EU average of 63%.

Replying to a question on their personal financial situation 39% of Cypriot participants feel that their employment situation is good while 34% bad.

Most of participants (53%) also consider that their household`s financial situation is good.

However the overwhelming majority (93%) feels that the employment situation in Cyprus is bad, compared with the EU average of 73%.

Cypriot participants have recorded the highest percentage (72%) who stated that they do not feel attached to the EU nor to Europe (64%).

At the same time 93% of those questioned said they consider that their identity is a national one rather than a European one.

Compared to the spring of 2014, the percentage of Cypriots who mistrust institutions is on an upward trend with 91% of participants stating that they do not trust political parties at all, they do no trust justice or the Cypriot legal system (70%) and the police (60%).

Turkish Cypriot participants` main concern are also on the economic situation and unemployment. The percentage of Turkish Cypriots who consider the Cyprus problem as the greatest problem in Cyprus has fallen.