Cypriots gather outside EU House to demonstrate solidarity with Greece 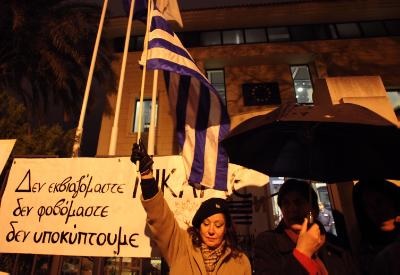 Cypriots and Greek residing in Cyprus gathered tonight under light rain and despite the cold weather outside the EU House in Nicosia demonstrating their support and solidarity towards the Greek people and the government of Greece ahead of the crucial Eurogroup meeting in Brussels, which takes place today to discuss the Greek debt crisis.

Representatives of political parties, trade unions, youth organisations and others participated in the event organised by the Solidarity Network of Greek Citizens of Cyprus. On behalf of the organisers, Demetris Alayiannis said that a message must be sent tonight to Europe, the policies of which “lead young people to unemployment”.

He thanked the people who gathered there, saying that their support is not only towards the Greek government, but to the whole democratic world.

Tonight, he said, Greece`s international lenders, are not only faced with the Greek government, they are faced with all of us, all of you, who represent those who suffer from austerity policies. He added that a similar event will take place on Sunday.