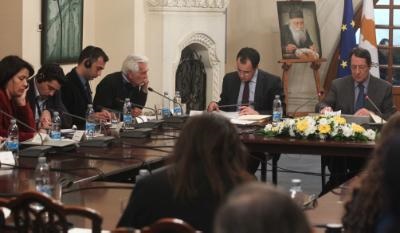 President of Cyprus Nicos Anastasiades called on the Turkish and Turkish Cypriot leadership to share his view of turning Cyprus into a modern European state.

Addressing Turkish and Turkish Cypriot media, at the Presidential Palace, in Nicosia, during a press conference, the President stated that “there is only one plan, solving the Cyprus problem and reunifying Cyprus, on the basis of all that has been agreed as a compromise”.

This, he went on, includes the evolution of the Republic of Cyprus into a bicommunal, bizonal federation, with political equality, as defined in the relevant UN resolutions, the High Level agreements of 1977 – 1979 and the Joint Declaration of February 11, 2014, with a single sovereignty, legal personality and citizenship.

“Cyprus and its citizens deserve much more than a divided country” President Anastasiades underlined.

He further assured Turkish Cypriot media representatives that he aims not in engaging at a blame game and referred to events preceding the suspension of bicommunal talks in October 2014.

In particular, he said that six days before the agreed assumption of substantial talks between the two sides on October 9, Turkey “without any reason and with the pretext of protecting Turkish Cypriot interests, issued its notorious NAVTEX for conducting research in the exclusive economic zone of the Republic of Cyprus”, infringing upon Cyprus` sovereign rights and in violation of international law.

Ankara further sent its seismic research vessel “Barbaros”, accompanied by a number of military vessels to start work in areas licensed to European and multinational oil companies, the President added.

He underlined moreover that the Turkish Cypriot side has never raised the issue of hydrocarbon reserves during negotiations, and reminded that the subject has been covered by existing agreements on natural resources.

He noted finally that the crisis which unfolded only days before the resumption of substantial talks did not leave him any option, other that suspending his participation at negotiation talks.

The Republic of Cyprus, an EU member state since 2004, has been divided since 1974 when Turkey invaded and occupied its northern third. Numerous UN-backed rounds of negotiations to reunite the island under a federal roof have not yet yielded result.