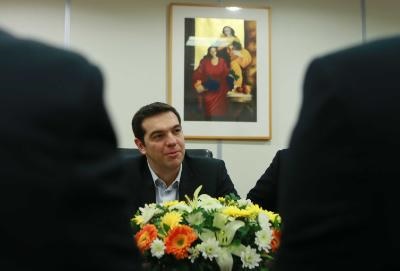 Cypriot parliamentary parties expressed on Monday their support for the efforts of the new Greek government.

Greek Prime Minister Alexis Tsipras, on an official visit here, the first abroad after his election, had separate meetings with the seven parliamentary party leaders at the House of Representatives.

In statements after the meeting, ruling party DISY Deputy President and MEP Lefteris Christoforou welcomed the new Prime Minister of Greece to Cyprus and stressed that where national interests are at stake there is no room for different ideologies. “We will continue to cooperate as we always have done in the past with all Greek governments,” he pointed out.

On his part AKEL Secretary General Andros Kyprianou promised to support the efforts of the Greek Prime Minister as regards Greece`s adjustment programme and said that he will be visiting Athens soon.

In his statements DIKO President Nicolas Papadopoulos said he had asked the Greek Prime Minister to probe into the sale of Cypriot banks` branches in Greece to a Greek bank in 2013. At the same time he wished Tsipras all the best in the difficult road ahead, adding that both the Greek and the Cypriot people are faced with similar problems.

Social Democratic EDEK Deputy President Marinos Sizopoulos also expressed his agreement with Tsipras on both the economic crisis and the Cyprus problem. He further said he proposed the establishment of a joint think tank to deal with the common problems the two countries face.

EVROKO President Demetris Syllouris said he wished Tsipras success in his efforts on the economic front, adding that if that is the case it will also be helpful for Cyprus and other EU countries.

Greens President Giorgos Perdikis said that during the meeting he expressed his support of the new government`s efforts to deal with an unfair memorandum of understanding and said that he believes that Cyprus should wholeheartedly support Greece`s efforts.

Citizens Alliance President Giorgos Lillikas said he has sent to all political parties a letter inviting them to participate in an event to show their solidarity with Tsipras` efforts at the next European Council. Such events, he added, will also take place in Greece and other European countries.