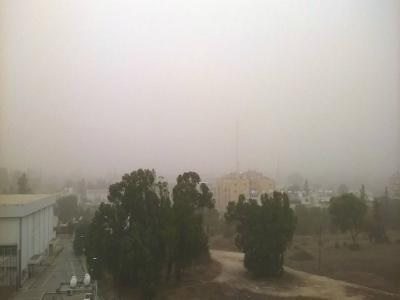 Scientists at the Cyprus Institute and colleagues from Israel are carefully monitoring the severe dust storm which has hit Cyprus since the afternoon of September 7, dwarfing previous more recent events, according to a press release issued here today by the Cyprus Institute.

Concentrations of dust with diameters less than 10 micrometers in the near-surface air amounted to about 3 milligram per cubic meter in Nicosia according to observations by the Department of Labour Inspection (DLI) of the Ministry of Labour, Welfare and Social Insurance.

“While this value falls short of a reported dust load of 12 milligram per cubic meter in the 20 March 2002 dust storm in Beijing, China, even such a load as we experience now is reason for concern for elderly people and children in general and for people with known respiratory problems in particular,” says the press release, adding that these groups of people should take appropriate precautions when being outside or stay inside their homes.

Scientists at The Cyprus Institute and colleagues from Israel are carefully monitoring the event. Their conclusion as of now is that the dust did indeed originate from the south (possibly the Arabian Peninsula), seems to have turned westward over Syria towards the Levantine Sea and Cyprus and is now returning eastward towards Israel.

The Cyprus Institute carries out extensive research on the origin of such dust events, their development and their implications for natural processes and human health. This is pursued in collaboration with European colleagues through a major EU-funded research project (BACCHUS) and by employing modern instrumentation at our observatory at Agia Marina Xyliatou, at our Athalassa campus in Nicosia and with our unmanned research airplanes.

Dust concentrations in Limassol have reached new peaks in excess of 6 milligram per cubic meter as measurements from the Department of Labour Inspection at 12:00 on September 8.