CYMEPA: Action to protect the environment during Rally 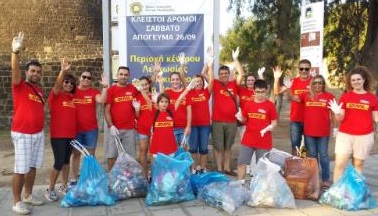 For the first time, action was undertaken to protect the environment during the Cyprus Rally and, as General Secretary of the Cyprus Marine Environment Protection Association (CYMEPA) Michalis Ierides told CNA, there are ambitious plans for the future.

Ierides said that for the Cyprus Rally 2015 a recycling point was set up at the Service Park in Nicosia, the participants were taken to the start and finish in Larnaca by bus, and the Super Special Stage in Nicosia area was cleaned in cooperation with an organisation in the Turkish occupied areas.

In statements to CNA, Ierides said “this is the first time that the Rally has proposed we undertake a consultative role and proceed with some initial small actions to make the Rally greener”.

He added that “the Rally is very important for tourism and the promotion of Cyprus internationally, but there is also a downside, which we have decided to address”.

“One of the measures we took was recycling. At the Service Park, which is the centre where all the cars gather for repairs etc, with the help of Green Dot, we placed recycling bins for glass, PMD and paper/cardboard”, Ierides said.

He noted that there were also barrels for used oil, which have been there in previous years, adding that “we placed everything in the same place”.

“At the Conference Centre, where the Headquarters of the Rally and the Press Centre were, we placed recycling bins for paper and PMD”, he said.

Ierides pointed out that the effort for recycling was met with enthusiasm.

He added that after the Super Special Stage in Nicosia, two groups cleaned the area. One group from CYMEPA cleaned part of the stage in the government-controlled areas, mostly empty plastic bottles, while in the Turkish-occupied areas a Turkish Cypriot organisation did the same.

“This was symbolic because we cannot clean the whole stage”, Ierides pointed out.

He said “our effort with the spectators and the participants was to reduce the waste produced, so that there was a smaller impact on the environment”.

Ierides added that for the start and finish of the Rally in Larnaca, the transport of the participants by bus was arranged, in order to reduce the overall fuel consumption and the emissions of pollutants into the atmosphere.

He noted that the actions will be repeated next year and that “we have ambitions to do much more”.

“One idea we have but did not have time to implement it this year is for the whole Service Park to draw energy from photovoltaic systems. This year, unfortunately, it was impossible because a lot of planning is needed and we were invited just a fortnight before the Rally”, he pointed out.

Ierides said “within a fortnight we came to an arrangement with the Turkish Cypriots, we carried out our clean up campaign on both sides, we recycled as much as possible”.

“There are some other things we would very much like to do, such as setting up the photovoltaic system, and we hope that we will manage to do so next year”, he added.

The Cyprus Rally 2015 was held from September 25 to 27, and counts as round eight of the FIA European Rally Championship and round five of the Middle East Championship,