CVIJANOVIC: THEY MUST LEARN – SRPSKA IS A PARTY TO NEGOTIATIONS 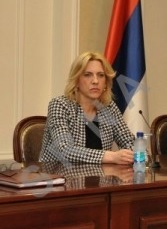 BANJALUKA, June 4 /SRNA/ – Republika Srpska Prime Minister Zeljka Cvijanovic told SRNA that the BiH Council of Ministers cannot form a team to draft a coordination mechanism to which it would appoint Republika Srpska Government representatives without previously conducting consultations with the Government and getting its approval.