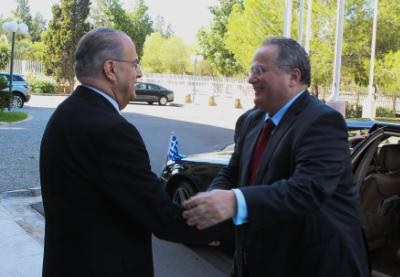 The cooperation between Greece and Cyprus has become more substantial, detailed and specialised, Greek Foreign Minister Nicos Kotzias has stressed. Kotzias, who is paying an official visit to Cyprus, was received on Tuesday by the President of the Republic Nicos Anastasiades.

Speaking after the meeting, Kotzias said that this has been a major practical step forward in the relations between the two countries.

Invited to comment on ongoing UN-led direct negotiation process, after he was briefed on the issue by the President, Kotzias pointed out that the Republic of Cyprus has the will, the ability and the capacity to strive to push forward a just solution to the Cyprus problem and in this it has the full support of Greece.

Referring to the international community, Kotzias said that some countries support that process, some are in a hurry more than necessary, and some are just observing.

Asked to comment on the position he has repeatedly expressed that the abolition of the system of guarantees is a fundamental issue, Kotzias said that he always repeats that position.

Asked if the international community is in a position to persuade Turkey to change its stance on the issue of guarantees, the Greek Foreign Minister said that when a few months ago he raised the issue after decades and reset the Cyprus issue to its real dimension, which is the presence of Turkish occupation troops on the island, many looked at him strangely.

Today, he said, it is considered as an issue that indeed must be discussed and many countries have accepted this view. “I think this fact cannot leave Turkey unaffected”, he said.

Replying to a comment that although Greece reiterates positions of principles on Cyprus problem, it is in a weak position due to the economic problems it faces, Kotzias reiterated that the economic weakness of his country does not diminish Greece`s strategic advantages and the country`s ability to exercise foreign policy.

“We try to maintain the level of our foreign policy and influence our weak point that is our economy and not the other way round”, he said.

Cyprus has been divided since 1974 when Turkish troops invaded and occupied the island`s northern third. Greece, Turkey and Britain are all guarantor powers of Cyprus’ independence, according to the 1960 Treaties that established the Republic of Cyprus