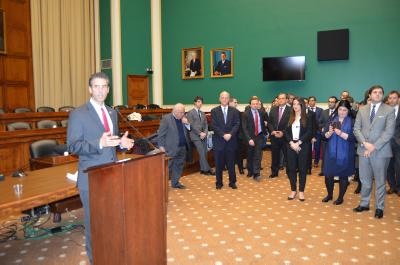 Greek and Jewish American organizations have joined members of Congress in celebration of the second anniversary of the Congressional Hellenic Israeli Alliance (CHIA), a bi-partisan group of members of Congress promoting the strengthening of the relationship of all four countries.

A reception has taken place on Capitol Hill, supported by the American Jewish Committee, Hellenic American Leadership Council and the Cyprus Federation of America.

Over a dozen members of Congress offered their remarks, stressing the importance of the CHIA, as well as the stabilizing role Israel, Greece and Cyprus play in a very volatile region.

Co-Chairman Gus Bilirakis told the audience he is proud that in two short years CHIA has grown into a group of members intent on strengthening the relationships between these natural allies, Greece, Cyprus and Israel, in a contentious region.

Speaking about Greece, Cyprus and Israel, he said they are currently entrenched in geopolitical battles with far reaching implications outside their borders.

“As we foster this growing relationship between Israel, Cyprus and Greece, we must continue to highlight how the United States can facilitate these relationships and benefit from strong alliances,” he said, pointing out that energy can be a catalyst for diplomacy and the discovery of hydrocarbons can provide energy security and stability, as well as tremendous economic growth to the region.

Regarding the Turkish provocations in the EEZ of Cyprus and the issuance of NAVTEX that brought the peace negotiations to a suspension, the Republican congressman from Florida said “now that these deliberate violations of Cyprus’ and Israel’s bilateral EEZ agreement are persisting, the time is ripe for America to flex more muscle”.

“We must speak loudly to preserve energy stability for all countries exploring and producing petrochemicals in the eastern Mediterranean. And also to do everything we can so that Cypriot reunification negotiations can resume again,” he added.

Bilirakis also expressed support for a pipeline connecting Tamar and Leviathan gas fields through Cyprus and Greece and into Europe and the continued military exercises between Israel and Cypriot forces, as well as between the Israel and the Greek forces.

Congressman Ted Deutch, co-chairman of CHIA, in his opening remarks praised the Hellenic, Cypriot and Jewish Organizations that supported the event, for working individually and collectively to achieve the same goals as the caucus and their support to CHIA.

Congressman Deutch promised that the caucus will continue to highlight priorities from energy pursuits to cooperation on regional security threats and support continued cooperation.

Addressing the audience, Cypriot Ambassador to the United States George Chacalli thanked the Co-Chairmen and all the members of the Alliance, as well as the community organizations that support the event, such as the American Jewish Committee, the Hellenic American Leadership Council and the Cyprus Federation of America.

Ambassador Chacalli said that although last year, during the celebration of the Alliance’s first anniversary, he was a bit more hopeful about the prospects of a solution to the Cyprus problem, this is not the case this year, because of the Turkish violations of Cyprus’ Exclusive Economic Zone and the use of force by Turkey to blackmail Cyprus.

“The effort of our side from day one is to see how to get back to the negotiating table as soon as possible, because the Cyprus problem has lasted for far too long. It’s time for our friends to be more forceful and use their influence with Turkey. Things can easily take a normal course and the negotiations can restart the soonest, but not under blackmail,” the Ambassador said.

The Cypriot Ambassador urged all members of the Congressional Alliance to convey the message that “we need to be little bit more forceful towards Turkey to stop its blackmailing tactics.”

Ambassador of Greece Christos Panagopoulos praised the efforts by the Alliance to bring together members of Congress and to help Israel, Cyprus, Greece and the United States playing jointly a role for the stability of the region. He said we would wish for Turkey to be able to play this role too, but unfortunately it doesn’t behave the way it should.