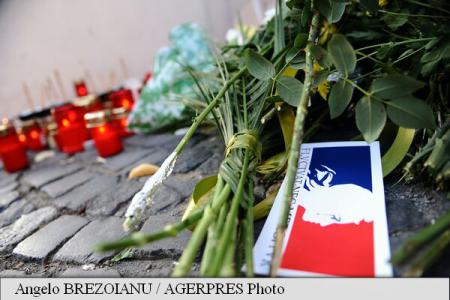 A condolence book opened Friday at the Embassy of France in Bucharest, and security at French official institutions in Romania tightened after the July 14 Nice terror attack, the French diplomatic mission said in a press statement to AGERPRES on Friday.

“The Embassy of France in Romania thanks all those who last evening expressed condolences and support for the French nation after the July 14 terrorist attack in Nice,” the statement reads.

French flags are being flown at half-mast in Romania.

Security has been tightened around all French official institutions in Romania through the mobilisation of Romanian authorities. “The Embassy of France extends special thanks to the Romanian authorities for their prompt reaction and their availability,” the statement says.

The condolence book opened before the Bucharest headquarters of the Embassy of France, No. 13 — 15 Amzei Church Street, and will be open to the public in the days ahead, 09:00hrs-20:00 hrs.

An online condolence register was also launched on the website of the Embassy of France, with messages pouring in from Romanian top officials, diplomatic missions and citizens. People who wish to express solidarity can do so on: presse.bucarest-amba@diplomatie.gouv.fr. More…