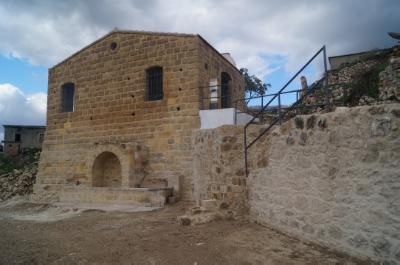 Conservation works at Evretou Mosque in Paphos district in the southwest of Cyprus are concluded and a special ceremony will take place next Sunday.

According to a press release issued by the Technical Committee on Cultural Heritage, the European Commission and the United Nations Development Programme Partnership for the Future (UNDP-PFF) the event will take place on March 1st, from 11.30am to 12.30pm. Former residents of the village will attend the ceremony.

An overview of the completed conservation works will be provided and a Q&A session will follow the site visit.

The mosque was built at the beginning of the 20th century on the main road of a small village located in the Paphos district and was selected as part of the priority intervention emergency projects of the Technical Committee on Cultural Heritage.

Conservation works focused on cleaning of the site including removal of vegetation, excavation for the purposes of natural drainage and prevention of further erosion of the external stonewall, repair to windows and the entire reconstruction of the roof. The project also included repairs to internal and external walls, strengthening of structure with metal rods, restoration of stonework, rebuilding and sealing of joints, flooring and painting of the internal wooden roof.

The cost of the project was of approximately 82,000 Euros (including works, designs and supervision costs), fully funded by the European Union.

The Technical Committee on Cultural Heritage works in line with the mutually agreed mechanism for the preservation of the island’s common heritage. In 2009 the Advisory Board was set up by a decision of the two leaders as the executive body of the Committee. The aim of the Board is to protect, preserve and facilitate the preservation, physical protection and restoration (including research, study and survey) of the immovable cultural heritage of Cyprus. This mechanism allows for the practical aspects of preservation to be considered in a non -political manner so that practical measures can be taken to improve the situation on the ground.

Since 2012 approximately €6.7 million of European Union funds have been provided by the European Commission to implement the priorities of the Technical Committee on Cultural Heritage for the preservation of the island -wide cultural heritage in Cyprus.

The European Union has also recently allocated another €1.4 million for a new project cycle, making it the biggest supporter of the work of the Technical Committee on Cultural Heritage in Cyprus.

The Republic of Cyprus, an EU member state since 2004, has been divided since 1974 when Turkey invaded and occupied its northern third. UN-backed talks to reunite the country under a federal roof have failed so far due to Turkey`s intransigent stance and a policy of a `two state` solution on the island.