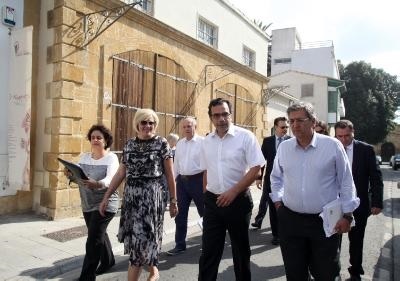 European Commissioner for Regional Policy Corina Creţu expressed on Thursday the Commission`s continuous support to Cyprus for the promotion of economic development and peace. She also reiterated President Juncker`s wish for the island`s speedy reunification, and expressed content over the improved climate and the “unique opportunity” prevailing.

Creţu, who is visiting Cyprus for the first time in her capacity as Commissioner, was given on Thursday morning a walking tour by the Mayor of Nicosia Constantinos Yiorkadjis in the Taht-el-kale neighborhood, in the old town, witnessing the extensive restoration work that has taken place in recent years, with the support of the EU. “We can effectively manage European funds” was the Mayor`s message.

In her statements, the Commissioner said it was a pleasure to see how much work has been done and how European money contributes to improving people`s life.

Our aim, she went on, is to assist Cyprus` economic recovery, with EU funds playing a significant role towards this direction, by providing an important source for public investment.

The Commissioner said she had fruitful discussions with the Mayor and earlier with the Minister of Defence, talking about the total absorption of funding available in the 2007-2013 programming period. She explained that while the old period is closing, it was important to work together ahead of the new programming for 2014-2020, in order not to lose any European money. “This is for the benefit of Cypriots” she said.

From his part, Yiorkadjis welcomed the Commissioner, by saying that her presence is a tangible proof of the interest displayed by the EU and herself personally over Cyprus.

Through EU funds from the new programming period, the Commission contributes to the area`s economic development and revitalization and helps in building a new inner-walled city, full of life.

The Mayor said finally that they discussed about the forthcoming programming period, while passing through the restored facades that have been funded from the previous period, showing thus that the Municipality is able to manage EU funding in an effective manner.

The walking tour began in front of Famagusta Gate, in the old city, with the Mayor, the Commissioner and her delegation heading towards the restored areas of Taht-el-kale. The delegation stopped at the Center for Visual Arts and Research, where the museum`s Executive Director Rita Severis gave the group a tour, showing the museum`s exhibits.

The Commissioner was particularly impressed by an 1897 cartoon at the front page of French magazine “Le Petit Journal”, showing a Greek and a Turk arguing, while the Great Powers are playing the tune in the background.

Creţu and Yiorkadjis walked past the roadblock at Ermou street, once a commercial street at heart of old Nicosia, they stopped for a brief coffee nearby and then headed towards the old town hall square and witnessed progress in the construction of the new town hall. The tour ended with a visit at St. John Cathedral, next to the Archbishop`s Palace.

According to the European Commission, the Republic of Cyprus is due to receive in the current budget period 2014-2020 approximately 908 mln euro from the European Structural and Investment Funds, which amount to almost 1 bln euros, if national co-financing is included.