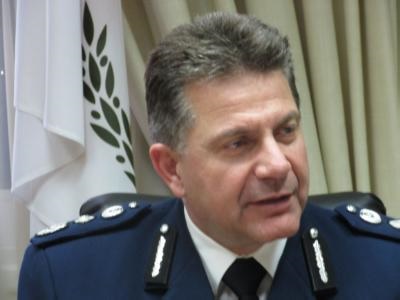 The Cyprus Police have embarked on a fight to curb corruption at all levels, the Chief of Police Zacharias Chrysostomou has told the Cyprus New Agency in an interview, adding that despite the fact that the effort is in its infancy, the first results are becoming obvious.

The Chief said that investigations into the causes for the collapse of the former Laiki Bank are at an advanced stage and the Police are seeking additional legal assistance from other states.

In the interview, Chrysostomou assured that the Police are in constant communication with Europol, Interpol and the FBI and at this stage there is no available information on a terrorist attack in Cyprus.

He also said that the FBI and the Cyber Tipline Notification transmit a lot of data on child pornography, which shows an increasing trend.

Chrysostomou said that despite the increased number of incidents of serious violence within the family in 2014, there is no sufficient or scientific link between the economic crisis and violence in the family. However, he said surveys carried out abroad, show that cruelty against animals could be related to violence against members of the same family.

According to the Chief of Police, the disintegration of family and moral values fuels corruption and violence in sport and warned that there is zero tolerance of violence at sports grounds.

Asked about the measures taken by the Cyprus Police to prevent terrorist attacks, he said that despite the fact there is no evidence that such an attack is likely to happen in Cyprus, the police force has to be on alert and there is no complacency when dealing with international terrorism. “We take increased measures and we are in constant communication and collaboration with Cyprus Intelligence Services, as well as with agencies such as Europol, Interpol and the FBI,” he explained.

On child pornography, Chrysostomou acknowledged that more and more such cases are being reported to the police, noting that this is a global phenomenon, it does not concern Cyprus alone. He said the objective is to prevent child pornographic material on the internet and take measures to delete it. Investigations into such cases, he explained, show that there is an increasing use of social media and primarily Facebook by people under 18.

He added that victims contact the police and report a complaint, if there are threats and blackmail by the perpetrator. He said there are no complaints so far relating to meetings between the victim and the offender, noting however that invitations for a such meetings have increased addressed to under age persons are on the increase.

Asked by CNA if stress caused by the economic crisis results in an increase of domestic violence, the Chief of Police said that assuming that violence is reflected in crime during 2011-2013, data shows a decrease in crime basic indicators in Cyprus.

Referring to the Neighborhood Watch Scheme, Chrysostomou recall that it was first implemented on a pilot basis in 2003 in three police stations with 27 members. He added that now 74 members of the force are serving in the Police Neighborhood Police Scheme, covering 115 municipalities and communities and a total population of about 630,000 inhabitants.

Chrysostomou said that so far there has not been any survey into the effectiveness of this Scheme, noting however that according to public opinion, it is a positive measure.

Asked about the role of the police in animal protection and the prevention of cruelty against animals,  the Chief of Police said the protection of animals and the effective response to incidents of abuse is a particularly serious matter for society and the Police.

Asked about combating hooliganism and violence in sports grounds, Chrysostomou said the Police follow a zero tolerance policy towards this unacceptable and dangerous phenomenon. “Anyone who violates the law will face the consequences,” he warned.

As regards allegations of corruption in football, the Chief said the police have embarked on a fight against corruption at all levels, showing zero tolerance. He expressed the view that this effort, in connection with action taken by both the Law Office and the Audit Office of the Republic of Cyprus, is yielding results. He noted, however, that “we are still at the beginning.”

Chrysostomou said that instructions have been given from the Law Office to bring to justice three suspected cases of corruption in football, adding that the investigation continues in order to establish if it is possible to proceed with other cases.

Regarding investigations into the collapse of the economy, the Chief of Police said the team  investigating these cases is working tirelessly, methodically, with devotion and diligence, under the supervision and guidance of the Law Office.

He added that it is a difficult and at the same time complicated investigative work, which involves a wide range of economic activities, for the period 2006-2013. With the assistance of experts employed by the Law Office, he continued, the team is making every effort, through a responsible and thorough investigation, to fully document all the cases, corroborate the evidence before it and present them before the Court.