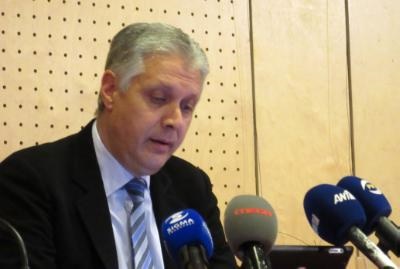 Stavros Zenios, a member of the Central Bank Board, stepped down on Friday, saying he cannot continue serving an untrustworthy institution.

Zenios, one of five non executive members of the Board, announced his decision to resign via his twitter account.

In his personal blog, he expressed the view that management at the Central Bank was concerned with handling procedures, instead of drafting policy and influencing decisions at local and European level to exit the crisis.

Later on Friday the professor of economics explained why he was stepping down at a press conference and announced that he had submitted his resignation to President Nicos Anastasiades.

“It is impossible for me to speak publicly about renewal, modernization and transparency, and continue to serve an untrustworthy institution. I have submitted my resignation to the President of the Republic. My resignation is my final act as an active member of the Board” he said.

Zenios implied that Central Bank Governor Chrystalla Georghadji should also step down and suggested that the President, the Finance Minister and the Parliament have their share of responsibility for the situation prevailing in the Central Bank.

President Anastasiades has asked the Attorney General to examine the facts and put into effect the constitutional provisions for the removal of Cyprus` top banker. The Government has said that the Central Bank`s credibility has been tarnished by the continuing issue of conflict of interest by Georghadji, whose estranged husband was the lawyer of former CEO of Marfin Laiki Bank Andreas Vgenopoulos, widely blamed for the collapse of the bank.

Stelios Kiliaris, who was the first to resign his post at the Central Bank, last week told the House Ethics Committee that the Central Bank Governor had during a Board of Directors meeting spoken of a list of MPs with non performing loans and of an alleged `bribe` of Deputy Attorney General Rikkos Erotokritou by Panayiotis Neocleous of the law firm Andreas Neocleous & Co.

An independent criminal investigator has been appointed to look into these allegations.

“The President is faced with a very difficult situation caused by people he trusted. However the options were clearly his,” Zenios told the press conference.

Asked whether Georghadji`s resignation would restore the credibility of the Central Bank, the professor of economics said that this could be one of the steps that should be taken, and stressed the need for institutional changes at the Bank.

He noted that he had sent various letters to the Governor highlighting institutional problems and suggesting changes to be made.

“The Board of Directors had pointed out the malfunctions caused by the conflict of interest. Unfortunately we weren`t heard” he said.

The credibility of the Central Bank has been tarnished by the handling of the Governor, that seems to blackmail the House, he added.

Zenios also said that he resigned because the Board is targeted by all political parties due to interests across the board involving law firms, economic players, politicians and state officials.
CNA/THN/KD/MM/2015
ENDS, CYPRUS NEWS AGENCY