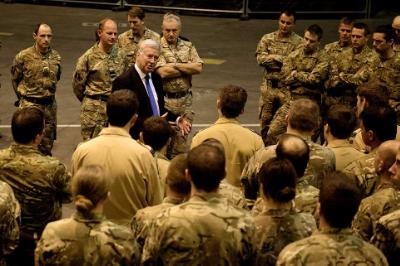 The British Defence Secretary Michael Fallon visited the RAF base in Akrotiri on Sunday, where he met personnel from 903 Expeditionary Air Wing, who are providing the UK’s contribution to coalition air operations against the Islamic State.

During what was his second trip to Cyprus, Fallon discussed the campaign and talked to the pilots who are flying twice daily missions as the UK continues to contribute to coalition airstrikes in support of Iraqi forces.

The Defence Secretary also met troops from 2nd Battalion, Princess of Wales’s Royal Regiment, and received a briefing on the key role they are playing in the training programme to build the capacity of the Iraqi Security Forces.

Fallon said he was proud of the work the 400 personnel based in Cyprus were doing to help the Iraqi government and he noted that while this fight would take time, “the coalition’s airstrikes are having a direct effect in supporting Iraqi ground operations against ISIL.”

The RAF base Akrotiri has been home to extensive air capabilities since coalition air operations began last year. These include eight Tornado GR4s which have conducted 159 strikes, a Voyager aircraft to refuel UK and coalition jets while on air, C130 transport aircraft which have delivered both humanitarian aid and military support and finally a E3-D Sentry, deployed at the end of January, which has enhanced the coalition’s airborne control and surveillance capability.