Belgian politician: Cypriots suffered more from crisis than other Europeans 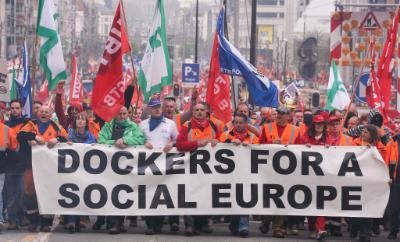 The President of the Workers` Party of Belgium Peter Martens has sent a message of solidarity to the people of Cyprus, noting that Cyprus has suffered more from the economic crisis than other European people.

Martens, heading a party delegation, held a meeting today in Nicosia with General Secretary of the left – wing main opposition AKEL party, Antros Kyprianou with whom he discussed the European austerity policies and recent developments in the Cyprus issue.

“We come with a message from Brussels, not from the Commission, but from the people of Brussels, the people of Belgium, who like many other peoples in Europe are in struggle against the same politics of austerity, privatization, the politics that are applied everywhere in Europe”, he said.

Martens added that “Cyprus has suffered more from the crisis, the EU has tried to apply some measures in Cyprus to test these politics for other European countries”.

He referred to the gap between the rich and the poor, which is deepening. “One in three children is raised in poverty in Brussels, while last year in Belgium there were 12,000 new multi-millionaires”, he said.

Martens was informed about the resistance of AKEL against the austerity policies in Cyprus as well as about AKEL`s positions on the Cyprus problem.

“We support the efforts of AKEL to resolve this problem. We are grateful to be here and we have a solidarity message to the people of Cyprus and the AKEL party”, he said.

In his statements, the General Secretary of AKEL thanked the Belgian official for his support.

Referring to the Cyprus problem, he said that AKEL has the will to work hard for a solution which will be based on the relevant UNSC resolutions, international and European law.

They both share, he went on to note, the willingness to fight against those policies since they believe that Europe and the people of Europe are worth a much better future.

The Belgian delegation was also received by the President of the House of Representatives Yiannakis Omirou and trade unions.

Cyprus has been divided since 1974 when Turkey invaded and occupied its northern third. A new round of UN-backed talks is expected to commence in the coming weeks with the aim to reunite the island under a federal roof.