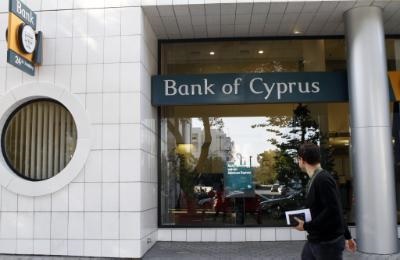 Bank of Cyprus Group announced €29 million after tax profit attributable to the owners for the quarter ending 31 March 2015, compared to a loss of €337 mn in the fourth quarter 2014.

Profit before provisions and impairments, restructuring costs and discontinued operations for 1Q2015 was €170 mn, compared to €167 mn for 4Q2014.

Provisions for impairment of customer loans (continuing operations) for 1Q2015 amounted to €148 mn , compared to the elevated provisions of €248 mn for 4Q2014, which is related to the completion of the review of the Asset Quality Review (AQR) results.

Profit after tax from continuing operations (profit after tax excluding restructuring costs, discontinued operations and net loss on disposal of non-core assets) for 1Q2015 totalled €57 mn, compared to a loss of €107 mn for 4Q2014.

In a written statement the Bank`s CEO John Patrick Hourican noted that the Bank against its strategic objectives during the first quarter, reduce ELA by €500 mn and continues to stabilise its deposit base while maintaining its capital position.

“The loan to deposits ratio improved to 138%, partly because of the continuation of positive customer flows, which is evidence of the increasing trust and confidence of our customers. Furthermore, the improvement in the Bank’s core results continued, with profit after tax from continuing operations totalling €57 mn, compared to a loss of €107 mn for 4Q2014” he said.

He added that the bank`s significantly strengthened capital position and overall improvement in its financial position enhance its funding options and will facilitate access to the capital markets, especially following the recent successful debt raising by the Republic of Cyprus. As he said, depending on market conditions and investor appetite, the Bank will assess the possibility of raising wholesale funding, with the proceeds of such funding used to reduce ELA.

Hourican also pointed out that the adoption of the foreclosure legislation and insolvency framework is a significant step in enabling the Bank to tackle its delinquent loans and improve asset quality.

“Through specific, deliberate and well-timed actions we are delivering a stronger, more focused institution capable of supporting the recovery of the Cypriot economy”, he said.

He added that as the leading financial institution in Cyprus, the Bank’s financial performance is highly correlated to the economic and operating conditions in Cyprus and will benefit significantly from the economic recovery.