Approval of foreclosures bill to bring benefits to the economy, FinMin says 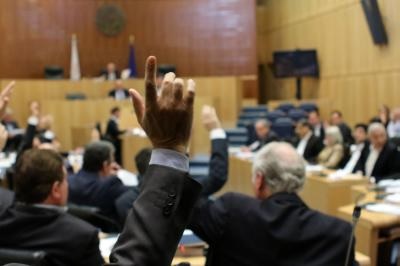 Finance Minister Harris Georgiades has expressed satisfaction with the adoption by the House of Representatives of the insolvency framework.

In an interview with CNA, in Washington, where he is for the 2015 Spring Meetings of the World Bank and the International Monetary Fund, the Minister said that this is a very important development that will have both direct and indirect benefit to the Cypriot economy.

The direct benefit has to do with an improved legal framework which will encourage sustainable restructuring of non performing loans, offering protection and facilities to pay the loan installments where there should be and compliance measures where necessary, he told CNA.

On the indirect benefits, which he described as equally important, the Minister said they are related to the prospect of Cyprus` participation in the European Central Bank (ECB) quantitative easing programme and restoration of Cyprus` funding both from the institutions and mostly the markets.

“Therefore, it is an important modernization step, which also facilitates the recovery course of the Cypriot economy,” he added.

Regarding the timetable concerning the drafting of a bill by the government, within a month, on property mortgaged by developers, he said that a reasonable and reliable adjustment must be made to a complex issue.

In relation to the next steps, following the approval of the insolvency framework, he said that what is important is that the conditions are being created to continue the evaluation process of the country`s economic adjustment program by Cyprus’ international lenders, the Troika (EU Commission, IMF and ECB).

He expressed the view that Troika`s visit to Cyprus to complete its evaluation will be arranged in
in the next few days.

“We have before us the opportunity and the challenge, cooperating with the institutions, to draw up a strategy to conclude the adjustment program in the coming months. ”

In an effort to conclude the Cypriot program in the next few months, the Government intends to promote some important reforms which relate to the reform of the public service, the health sector and the promotion of specific privatizations.

On the sidelines of the 2015 Spring Meetings of the World Bank and the IMF, Georgiades met with the Deputy Executive Director and a team of officials of the IMF, with whom he discussed in detail the facts, progress and common plans for the next few months within which the Cypriot program will be completed.

He also had meetings with US government officials, including the US Assistant Secretary of Treasury for International Finance Ramin Toloui and contacts at the State Department and meetings with the White House advisor on economic issues and officials from the National Security Council.

During his talks with US officials, they discussed further expansion of economic cooperation between Cyprus and the US and attracting new US investment, apart from the recent ones, in banking sector with the Bank of Cyprus and the Hellenic Bank and the participation of American interests in the energy sector.

“We see significant potential for new investments, for example in the case of casinos,” said the Minister of Finance, noting that the expansion of economic relations and the realization of such investments from US, “contributes decisively to further strengthening and consolidating the strategic relationship between Cyprus and the USA. ”

The House plenary approved yesterday by majority vote the foreclosures framework, during an extraordinary session and following a long debate. The parliamentary parties voted in favour of the foreclosures bills with a majority of 33 votes in favour in some cases and more positive votes in other cases.

The insolvency framework went through parliament following consultations between the Socialist party EDEK and the Democratic Party (DIKO) with the ruling right wing Democratic Rally (DISI) party and the government.

EDEK voted in favour, having secured the unanimous approval of its four amendments to the bill, which it had said were its “red line.”

The insolvency legislation comprises a set of laws which govern bankruptcy procedures. The House voted last December to suspend implementation of strict foreclosure rules, a decision which was renewed until April 17.

Excluded from the international capital markets since May 2011, Cyprus applied for a bailout in June 2012 to avert the collapse of its banking sector and cover its financing needs. The €10 billion bailout agreed in March 2013 however featured the unprecedented bail-in of uninsured deposits coupled with capital controls which the plunged the economy into deep recession.