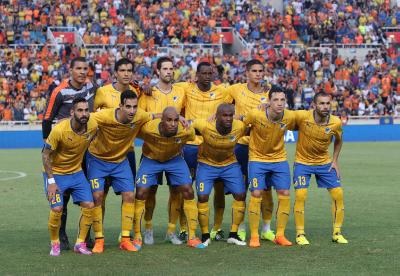 APOEL has made it to the Champions League play-offs, despite losing 1-0 home from Midtjylland on Tuesday.

During the first leg of the third qualifying round, APOEL had won 2-1.

Midtjylland`s Sviatchenko scored in the second minute, while APOEL played with ten players after the 29 minute when the Scotch referee Bobby Madden showed Vinicius the red card.

Meanwhile three other Cypriot football teams, Apollon, Omonia and AEK will give on Thursday their second leg games for the Europa League third qualifying round.

Apollon will face Qabala, Omonia plays against Brondby and AEK against Bordeaux. The results of the first leg games were Apollon – Qabala 1-1, Brondby – Omonia 0-0 and Bordeaux-AEK 3-0.