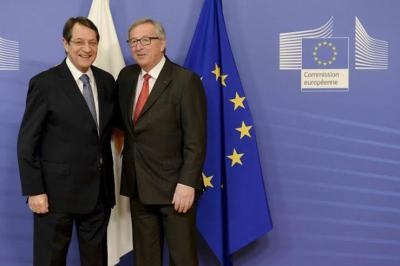 President of the Republic of Cyprus Nicos Anastasiades will hold a meeting on Thursday with the President of the European Commission Jean Claude Juncker, on the sidelines of the fourth EU Eastern Partnership Summit that takes place in Riga, 21-22 May.

According to CNA sources, the meeting will take place late in the afternoon and will focus on the Cyprus issue, the developments following the resumption of the Cyprus talks and the more active role of the EU in the process for a Cyprus settlement.

On the sidelines of the Summit, President Anastasiades will hold meetings with EU leaders.

The Summit will reaffirm, inter alia, the importance of the relations between the EU and its Eastern partners and will examine the recent developments in the Eastern Europe region and the Caucasus.

Meanwhile, it is expected that more details will be announced on Friday regarding a social meeting that will take place on Saturday in Cyprus between the leaders of the two communities of the island, President Anastasiades and Turkish Cypriot leader Mustafa Akinci.

President Anastasiades is accompanied in Riga by the Government Spokesman Nikos Christodoulides.

Cyprus, an EU member state since 2004, has been divided since 1974, when Turkish troops invaded and occupied 37% its territory. A new round of talks under UN auspices aiming at reaching a political settlement and reunifying the country, under a federal roof, resumed this month after eight months of stagnation due to the violation by Turkey of the sovereign rights of Cyprus in the Cypriot Exclusive Economic Zone.