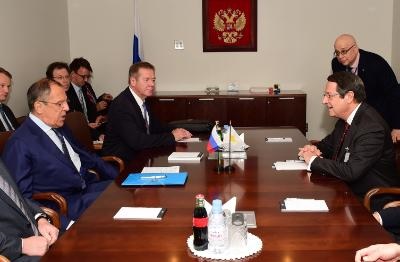 Cyprus President Nicos Anastasiades discussed in New York with the Minister of Foreign Affairs of the Russian Federation Sergey Lavrov the ongoing UN-led negotiations on the Cyprus problem, economic as well as energy issues.

In statements to the press after the meeting, Anastasiades said it was particularly productive, noting that he briefed Lavrov on the course of the negotiations on the Cyprus problem, thanking him for the long-standing position of principles of the Russian Federation on the problem.

He noted that they also had the opportunity to discuss, apart from the Cyprus problem and the contribution which Russia can have in the talks and the settlement of the problem, issues concerning the economy and the energy sector.

Furthermore, he said that on the occasion of the 55 years since the establishment of diplomatic relations between the two countries, “Lavrov expressed the wish, after our invitation, to pay a visit to Cyprus” and thank in this tangible way Cyprus for is stance as regards measures taken against the Russian Federation.

Cyprus has been divided since 1974, when Turkish troops invaded and occupied 37% of its territory. UN-led negotiations between President Anastasiades and Turkish Cypriot leader Mustafa Akinci began in May this year with a view to reunite the island under a federal roof.