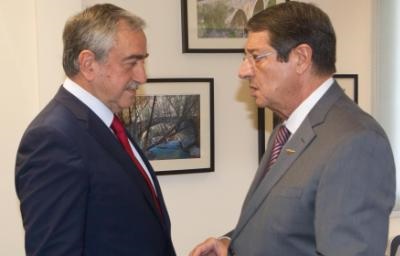 Cyprus President Nicos Anastasiades, and Turkish Cypriot leader Mustafa Akinci, had on Wednesday morning, in Mont-Pelerin, Switzerland, a first exchange of views on the criteria for the territory issue, a source has told CNA.

According to the same source, the meeting took place in a good climate and the discussion will continue in the afternoon.

UN Secretary General`s Special Adviser on Cyprus, Espen Barth Eide, posted a photo of the meeting on his twitter account, saying that criteria for territorial adjustment is the focus of the third working day at Mont-Pelerin.

Eide also retweeted a photo of the two leaders attending a lunch with members of their delegations.

Anastasiades and Akinci began on Monday in Mont-Pelerin intensive negotiations on the territory issue and all other outstanding issues interdependently. The talks in Switzerland are scheduled to conclude on November 11.

Cyprus has been divided since 1974, when Turkish troops invaded and occupied 37% of its territory. Anastasiades and Akinci have been engaged in UN-led negotiations since May last year, with a view to reunite the island under a federal roof.