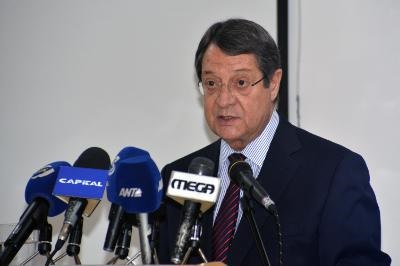 The election of Mustafa Akinci to the leadership of the Turkish Cypriot community gives hope that at long last Cyprus will be reunited, President of the Republic Nicos Anastasiades said here today, following Akinci`s landslide victory in a poll on Sunday in the island`s northern Turkish occupied areas.

“Akinci`s election gives us hope that we can have a modern state where EU principles and values will prevail,” the President said, commenting on the outcome of the election, which gave Akinci just over 60% and his opponent Dervis Eroglu 39%.

Addressing the conference of the public servants’ trade union PASIDI, Anastasiades pointed out that there are prospects for cooperation, peace and calm in a place where for years people have lived without problems.

The President sent a message to Ankara to contribute towards a solution because “it is Turkey which occupies Cyprus` northern areas.”

“We reach out our hand, not to have it assaulted, but to have it accepted,” he said, and expressed the conviction that there will be cooperation for the good of the country.

UN-led peace talks are expected to resume in May, with the top UN Cyprus envoy arriving on the island next week to prepare the ground for the resumption of the talks.