AKEL and RTK to form joint committee on Cyprus problem 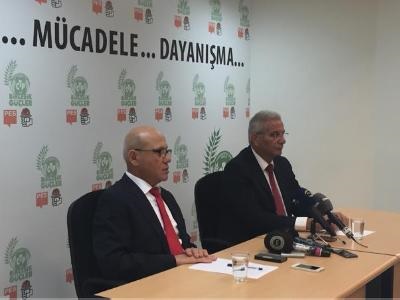 Greek Cypriot left-wing party AKEL and Turkish Cypriot Republican Turkish party (RTK) have agreed that progress has been achieved in the talks for a comprehensive settlement to the Cyprus problem but the road to an agreement is still long noting that the effort is very decisive.

Delegations from the two parties met on Tuesday at the RTK’s headquarters in occupied Nicosia with Andros Kyprianou, AKEL General Secretary announcing after the meeting the creation of a joint committee of the two parties to contribute with suggestions and ideas to overcome the difficult issues.

Replying to a question, the General Secretary of AKEL said that the aim and objective with Mehmet Ali Talat is to provide information to the public so people will know the contents of the solution. The committee will soon start work and the agenda, as Kyprianou explained, will be determined in the near future.

The President of RTK Mehmet Ali Talat stated that the aim of this joint committee is not to replace the talks of the two leaders but to be supportive to them and the negotiating teams and also correctly inform people. Asked if the committee will work in collaboration with the two leaders, Talat said that “wherever possible and when we know a problem in its detail”.

According to Kyprianou, the leader of each party can inform the respective leader of his community and discuss ideas and proposals put forward by the committee.

Kyprianou said that persistence and patience is required to solve the Cyprus issue and reunite the country, adding that together with RTK they have supported efforts throughout the years for a solution.

UN-led meetings between President Nicos Anastasiades and Turkish Cypriot leader Mustafa Akinci began in May this year, with a view to reunite the island under a federal roof.