A letter makes all the difference between life and death, Ibrahim tells CNA about his friendship with G. Clerides 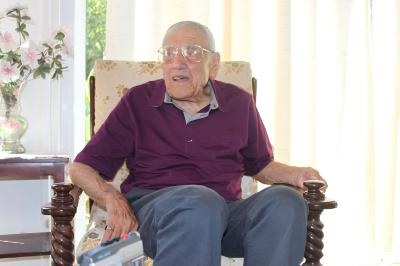 A Turkish Cypriot World War II soldier, serving with the British army, and a Greek Cypriot soldier, both imprisoned in the same German camp. A friendship is born between the two in captivity, which blossoms as the Greek Cypriot, Glafkos Clerides, who later became President of the Republic of Cyprus, saves the life of his Turkish Cypriot compatriot, Ibrahim Salih Bekir, whom the Germans mistakenly took for a Jew by the name of Abraham.

Bekir, 97 years old today, in an interview with CNA, unfolds his memories about World War II and his friendship with the late President Glafkos Clerides. He recounts some other stories when he served at the Central Prisons in Nicosia during the British colonial rule and explains how he met Cypriot resistance fighter Michalakis Karaolis, the first EOKA member to be sentenced to death alongside Andreas Dimitriou on 10 May 1956.

“First we were deployed in Egypt and Libya where we fought against the Italians. After this I went to Greece because the Germans started pushing up in mountain Olympus. We started retreating. From there they pushed us till Kalamata (a coastal Greek town),” he says and describes how their hopes to be rescued turned into a nightmare when, instead of the English fleet, German ships appeared on the horizon.

“We were waiting for the English ships to come and take us away. We waited all night. Suddenly we saw lights out at sea and we began cheering. They were German, they surrounded us and took us prisoners,” Bekir tells CNA.

He then recounts how they were transferred to Salonica to a temporary prison where he nearly died. Under the guidance of their English officer in command, they decided to attempt an escape through the sewage pipes.

“One night,” Bekir recalls, “a group of us set off, hoping to escape. Fifteen or sixteen managed to escape and ran into nearby woods. Then the General told me `it is your turn`. I went down into the pipe and I was ready to start crawling. Suddenly, we heard machine guns. The Germans discovered the last people coming out of the pipe on the other end and killed them all. Our officer shouted `back-back`. I rushed back”.

A tearful Ibrahim takes a moment or two to compose himself and continues his story.

Two months later they were transferred to Czechoslovakia, only to be taken later on to what he describes as “the biggest prisoners` camp”, on the borders between Poland and Germany. Some 34 thousand prisoners were held there, he says.

“There I met Glafkos Clerides. Being both Cypriots we became friends, very – very good friends. We spent four years together. We shared everything, food, the cigarette buds the Germans were throwing away which we collected from the ground,” he says.
“Glafkos was such a gentleman, without discriminating Turks or Greeks, he was treating us the same way,” an emotional Ibrahim reminiscences.

We ask about their daily life; what they were doing during the long days of captivity. And to our surprise Ibrahim Bekir proudly unveils another detail of his life before the War. He was a good football player, he says. In fact, he played for a year for a Greek Cypriot team, Aris Lemesou, he adds. “I was the centre forward,” he says.

“During the day we used to play football and other sports,” in one of the eight teams the prisoners had set up. Bekir played for the Irish team “because there were not many Turks or Greeks to form a team”. Clerides, he explains, did not play with him. “Glafkos organised a Cypriot volleyball team and we were the champions of the camp. I was the captain and Clerides was playing near me. I was better than him, but anyway…” he says in a humorous tone.

Clerides` escape
–—-
Bekir then recounts another story about Clerides` attempt to escape together with a Yugoslav fellow prisoner and the reason why he, Bekir, did not follow them. “Are you coming? Clerides asked me. I said let me think about it. Next morning the Irish football captain came and reminded me about the important match ahead of us. So I told Clerides, look, I promised to play. I can’t leave them. It’s up to you, he said. And he escaped with the Yugoslav friend”.

“Clerides and the Yugoslav walked for nearly 3-4 days in the forest. They were very near Yugoslavia when they got hungry and decided to eat a tin of English corn-beef they had with them. They threw away the empty tin and they continued walking. But a German patrol spotted the tin and they started searching around, till they found and captured them and brought them back to the camp,” he says. “They were so near. They were an hour and a half away from the sea. When they came to the camp again, we were making jokes of course”, Bekir remembers.

Eye-witnessing the tragedy and how Glafkos saved Ibrahim
————————————-
“Time passed. The camp where the Germans were burning the Jews, women, men, and children was nearly 100 yards away from our camp. And we used to watch hundreds of people brought in on lorries”. This is how Ibrahim Salih Bekir describes the scenes they witnessed from such a short distance.

“One day a German officer came to me and said the chief of the camp wanted to see you. Clerides was near me and I said, “Re (You) they want me to go the office”. He asked why, I said I don’t know but I am scared. Are you coming with me?”, because he was in charge more or less of all the Cypriot prisoners. He said “I will come with you, sure”. And we went”.

The Germans announced to them that being a Jew, as they maintained, he would be detained until further notice. Ibrahim protested, saying “I am not a Jew. They insisted, your name is Abraham. I said, no, I’m not Abraham, I am Ibrahim.”

Then Clerides intervened. “He said he is with the British army, he is not a Jew. They argued and he insisted that I am Turkish and my name is Ibrahim not Abraham. He took me away and saved my life,” Ibrahim Bekir recalls and he is overwhelmed with emotion.
“God save his soul, he passed away. He saved my life,” he repeated with tears pouring down his cheeks.

“Since then I have become so close to Clerides. I will never forget the things he did for me. He saved my life and that`s why I will never ever forget him”, he said repeatedly.

The end of the war
—————–
As the end of the war was approaching, the Germans from the camp were sent to the Russian front and were replaced by soldier-boys, 14-15 years of age. Bekir, who describes them as worse than older soldiers, talks about the hatred they showed towards the prisoners, the pushing and the shoving, the biting.

When the war came near to an end, the Germans decided to evacuate the camp because the Russians were ready to advance. Every night around 3-4 thousand prisoners were taken on foot through the mountains in what proved to be yet another ordeal for the prisoners.

“After three weeks of walking in the mountains I was exhausted, so fed up, no food, and no rest,” Bekir says and describes how he decided to spill hot water on his right leg hoping he would be left behind and transferred to a small camp nearby, where he was told sixteen Cypriots were also being held. And everything went as planned. “Nearly a week after that, the Allies freed us and I was transferred to Newcastle,” was the final act in Bekir’s days as a prisoner of war.

Return to Cyprus
–————————————-
“For all those years I was waiting to come home, to meet with my family again, to hold in my arms my father and mother,” he recalls. On arrival he was met by his brother who instead of taking him to their parents’ house at Heroon Square, he takes him to their sister’s home where they told him the tragic news. “Both my parents had passed away. That was the worst day of my life. I was waiting to hold them in my arms and give them the presents I got for them. Instead, I visited their grave at the cemetery and I threw away the presents. And I joined the army because we were so poor and I couldn’t find a job and I wanted to help them. All the years in the army I never received a penny. I asked that my money was sent to my mother”. That is how Bekir describes his homecoming and bursts into tears.

“It was my mother’s prayers that helped me stay alive through the war,” he says.

The prisoner becomes a guard
———————————
Another important chapter in Ibrahim Salih Bekir`s life is connected with Cyprus` history. His English army captain urges him to apply for a job with the prison service. He takes up his advice and follows him to Nicosia to the Central Prisons where he was assigned office duties, in charge of the statistical office, he says.

Those were the years of the EOKA uprising against British colonial rule, in the mid 1950s. Bekir meets at the Central Prison not only murderers and other offenders, but also Greek Cypriots fighting against the British.

There he meets Polykarpos Giorgadjis who later, after Cyprus gained its independence, became Interior Minister, Nicos Sampson, Ourania Kokkinou and Michalakis Karaolis. He describes how he became friends with Giorgadjis and Sampson, who was very young at the time and Bekir arranges that he cleans his office in order to avoid the much harder work the other prisoners were forced to do.

“In the prison I had some authority as to certain things and Giorgadjis would ask me for an extra visiting card for his family. The rule said one visiting card per month. And I gave him a second. The same thing I used to do for other prisoners also,” he says.

“I also met Karaolis. He was sentenced to death. And they (the British) used to ask him a lot of questions, interrogating him – not by me, I had nothing to do with that,” he emphatically stresses. “But Karaolis wouldn’t say a word. They told him, if you give us any information you will be free tomorrow. No, no, nothing. I went and met him. And I told him, if you want something, if I can help in anything. Not about his death sentence of course. I had nothing to do with that. But if he needed clothes, a visiting card or things I could help with. Finally, they hanged him,” Bekir remembers.

In 1960 England announced that if any of the people working for the Government in positions like a prison guard, and they were afraid for their life after Cyprus became an independent state, they could put that in writing and they would be given 5 thousand pounds. “And I said that I was afraid, that my life was in danger,” Bekir says.

Asked why he thought he was in danger since he had helped people in prison, his answer was short and blunt: “For the money, of course. I wasn’t afraid; all the Greek Cypriots I met became my friends. I lied for the money”.

He sold his house in Limassol for 3 thousand pounds and took his family to London. There he worked at the Ministry of Social Security for 30 years, until he retired.
CNA/GV/MM/2015
ENDS, CYPRUS NEWS AGENCY